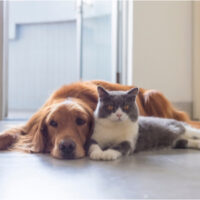 An article recently featured in TIME magazine highlights why it is so important for couples to address certain issues in pre-and post-nuptial agreements, including pet custody issues, in order to avoid expensive, lengthy court battles later on. The article highlights just how important pets are becoming to us and how one individual spent close to $40,000 in legal fees fighting for custody over dogs in their divorce because the custody issue was not addressed in a prenuptial agreement.

Pets are becoming just as important as children for more and more people each day. In fact, according to a survey by the American Veterinary Medical Association, 80 percent of pet owners view their pets as family members. More and more pets are also adopted rather than purchased and described as mixed breeds, indicating that their value comes from something other than what they cost. In fact, of the more than 1,000 millennial pet owners surveyed in 2018, almost 70 percent indicated they would actually take work leave to care for a new pet if possible, and 60 percent of men and 80 percent of women considered their pets to be their “fur babies.”

Pets as Property: Where The Court Battles Originate

Because in most states pets are still considered property, where there is a custody dispute, judges tend to assign responsibility based on who adopted or purchased a pet, or, if this cannot be ascertained, whoever paid for the pet’s care over the years. However, some couples decide that if two pets have bonded during the relationship, they should be kept together and, as a result, one person will have primary custody and the other one will have visitation rights, etc. Still, if this is not recorded in a prenuptial agreement, it is subject to one person suddenly deciding to cancel the arrangement, which then can result in a court battle. This is becoming more and more common, especially as more and more people consider pets to be like children and will therefore sometimes come to feel that the other individual is not properly taken care of the pets. As a result, pet custody disputes after divorce are becoming more and more common, and they can become complicated because courts and divorce laws fail to recognize that pets are not equivalent to other property items.

While some states are working on making progress to change the law on the issue, unfortunately, Florida does not yet have laws that treat pets as family members. With courts ill-prepared to adjudicate these battles, and unarmed with the right laws, these disputes can drag on for years and cost plenty as a result; that is, unless a pre- or postnuptial agreement specifically addresses who will have custody/visitation/etc. when it comes to the pet(s) in the instance of divorce.

The Key Is Addressing This Early On: Contact Our Florida Prenuptial Agreement Attorneys

There is no question that pets are more than property. They have awareness, emotions, sentience, and inherent value that distinguishes them from property. However, the law drags behind the science and the reality of our lives in this regard, and until divorce laws and the courts are more prepared to address pet issues in every divorce, it is essential that pet owners come to an agreement either before they are married (prenuptial) or after (postnuptial) in order to avoid expensive court battles later on.

Our Tampa family attorneys are prepared to help you avoid a volatile situation when it comes to family court matters, including assisting you in planning for everything that is important to you in a pre- and/or postnuptial agreement. Contact us today at HD Law Partners to find out more about our services.