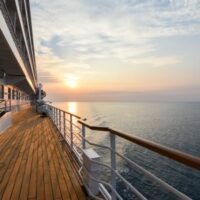 Each year, thousands of people set sail on cruise ships out of Florida. Most of these cruisers enjoy a wonderful vacation. Unfortunately, some people sustain serious injuries on their trip, often due to the negligence of the cruise line.

Now, you can file a personal injury lawsuit against a cruise ship operator just as you would any other negligent property owner. But such cases are often handicapped by the terms of the ticket that was issued before the cruise even began. If you have ever taken a cruise, you know what we are talking about. Most cruise tickets include, or refer to, a lengthy “ticket contract” that you must agree to beforehand, similar to a terms of service on a commercial website. These contracts often contain language that can restrict or even prevent you from bringing a personal injury claim should the need arise.

A recent decision from a federal judge in Miami provides a case in point. In Roberts v. Carnival Corporation, the plaintiff was a passenger on the defendant’s cruise ship. During the cruise, the plaintiff slipped and fell on the ship’s pool deck. She called the ship’s infirmary and was told someone would come attend to her at the pool. But nobody ever came, the plaintiff said, and she then had to walk to the infirmary herself, only further aggravating her injuries.

The plaintiff replied that she never personally accepted the ticket contract or the one-year limitations period. She said that she did not “personally book the cruise.” The plaintiff’s sister had booked the cruise and simply given the plaintiff her boarding pass just before the trip began. As such, the plaintiff said she never had a meaningful opportunity to review, much less agree to, the contract.

The judge said none of that mattered. The court noted that the defendant was only required to give the plaintiff a “reasonable opportunity to become meaningfully informed of the contract term.” This can be accomplished by giving notice to the person “who books travel arrangements on the passenger’s behalf.” And even if the plaintiff did not have a chance to review the terms of the contract before the cruise, she certainly did in the year following the cruise, and thus could have complied with the one-year limitations period. For that reason, the judge granted summary judgment to the defense and dismissed the case.

Anytime that you sustain an injury on someone else’s property, it is a good idea to seek out legal advice as soon as possible in order to preserve all of your potential options for seeking compensation. If you need to consult with a qualified Tampa slip and fall attorney, contact HD Law Partners today.