Legal Battles in Florida Over Displaying Flags in Homeowners’ Associations 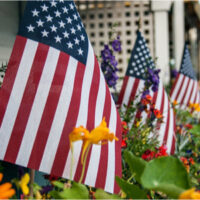 Battles over decorations between residents and homeowners’ associations is a common issue that both associations and property managers face on a regular basis here in Florida. This is one reason why you want to make sure that, as an association, you work with an experienced homeowners’ association attorney in creating association documents or amendments, as well as the appropriate covenants and restrictions, so that you are best able to manage these disputes and know what your rights beforehand – before they come up, or turn into expensive legal battles that can last decades.

Florida law states that “any unit may display one portable, removable United States flag in a respectful way.” That same law also provides unit owners with several other rights, for example, the right to install an electric vehicle charging station within their own common element parking area as long as it does not cause irreparable damage to the association’s property and the unit owner is responsible for all costs associated with it.

In allowing for the right to display an American flag, this state law simply reiterates rights already provided by the Freedom to Display the American Flag Act of 2005. However, the federal Act indicates that associations may, at the same time, adopt reasonable restrictions that are necessary to protect the substantial interests of the association, such as those that pertain to the manner, place, or time regarding the display of the flag. As a result, an association seeking to place some restrictions on the ability for unit owners to display their flags should consult homeowners’ association attorneys to ensure that any time, place, or manner restrictions fall under the association’s rights.

Speak with A Florida Homeowners’ Association Attorney If You Have Concerns