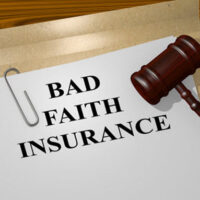 Insurance companies have two independent duties when it comes to paying a claim filed by a policyholder. The first duty is contractual, i.e., the insurer’s responsibilities under the policy itself. This contractual duty extends to any requirements regarding the evaluation and payment of benefits.

The second legal duty is that imposed by statute, i.e., by the Florida legislature. State law requires all insurers to “act reasonably and in good faith” when evaluating a policyholder’s claim. Even if the insurer ultimately pays the claim–that is, fulfills its contractual duty–it can still be held liable for acting in bad faith with respect to its statutory duty.

The Florida Second District Court of Appeals recently addressed the interaction of these two duties in a first-party bad faith insurance lawsuit. In Williams v. State Farm Florida Insurance Company, a homeowner filed a claim with his insurer over lightning damage to his property.

The insurer acknowledged coverage and made payments to the homeowner over a period of several years. But the homeowner eventually disputed the amount of the loss. This prompted the insurer to invoke an appraisal clause in the insurance policy.

While the appraisal was pending, the homeowner filed a Civil Remedy Notice (CRN), which is a necessary precondition to filing a bad faith lawsuit under Florida law. The homeowner ultimately filed such a lawsuit. Before he did, however, but after it received the CRN, the appraiser issued an award and the insurer paid the full amount of that award.

Nevertheless, the homeowner still pursued his bad faith lawsuit. A dispute arose before the trial court over whether or not the insurer’s payment of the final appraisal award actually “cured” the CRN. In other words, did the fact that the insurer paid the award after it received the CRN justify dismissing the homeowner’s lawsuit?

The trial court said “yes.” The Second District said “no.” The appellate court explained that both the insurer and the trial court had conflated contractual and statutory duties. The appraisal award addressed contractual duty. But under Florida’s bad faith insurance statute, once the homeowner filed his CRN, the insurer had 60 days to respond–i.e., to cure the notice by fulfilling its obligations. But the insurer waited past the 60 days until the arbitration process was completed.

The insurer argued that the 60-day period should have been “tolled” until the date of the arbitration award. The Second District disagreed. Again, whether or not the insurer met its contractual duty was a separate question of whether it met its statutory duty. As such, the homeowner could proceed with his bad faith claim.

Insurance companies and policyholders alike need to be aware of how different aspects of Florida law may affect their rights in the event of a dispute. An experienced Tampa bad faith insurance attorney can provide guidance and legal representation. Contact HD Law Partners today to schedule a consultation.