Close Menu
Switch to ADA Accessible Website
Our firm is open and serving the needs of existing and new clients. Click here for more information relating to scheduling consultations remotely via telephone, Zoom or other video platforms during the COVID-19 pandemic.
Tampa Insurance Attorneys > Attorneys & Staff > Dennis A. Meyers 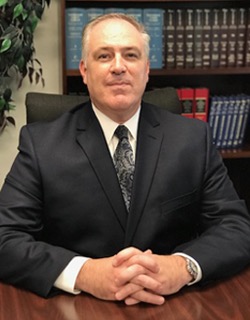 Mr. Meyers grew up in Scranton, PA, and attended Penn State University, graduating with a B.A. in International Politics and a Minor in Middle East Studies. He then attended Roger Williams University School of Law in Bristol, RI. Just prior to graduating from law school, Mr. Meyers began working at Progressive Insurance as a licensed insurance adjuster. Shortly after graduating from law school, he moved to Florida and took an adjuster position with Hartford Insurance in Tampa before beginning his legal career.

Having a strong military tradition in his family, after graduating from high school, Mr. Meyers enlisted in the U.S. Naval Reserves, serving as a Hospital Corpsman from 1987-1995. During his military service, and while attending Penn State, Mr. Meyers was called to serve in a combat zone in northern Saudi Arabia during Operation Desert Storm. For his service during that conflict, he was awarded a Letter of Appreciation from his commanding officer.

Throughout his legal career, Mr. Meyers has primarily focused his practice on insurance defense and commercial litigation. Mr. Meyers began his legal career in 2002 when he joined a state-wide insurance defense firm in Tampa, concentrating in workers’ compensation and general liability cases. In 2006, he formed his own law practice continuing his concentration in insurance defense, while also progressively increasing his concentration in commercial litigation and intellectual property, handling litigation matters at both the state and federal level. After several years in his own law practice, he joined Barr, Murman & Tonelli as a partner, later joining and becoming a partner at Tampa Bay Business Law. Prior to joining HD Law Partners, Mr. Meyers was General Counsel for a national medical company based in Tampa.

Mr. Meyers maintains a strong belief in serving in his community, and has had extensive involvement in community organizations throughout Tampa Bay, to include:

I acquired the services at HD Law Partners several years ago due to a divorce (that was taking 3 years with another law firm) and Ray A. Haas was able to resolve it in no time. Just recently, I needed their help again against my HOA. Dennis A. Meyers just happen to sit in at my second consultation and ran with it. He was most professional and knowledgeable with the HOA... read more